Super Cooper is our resident gymnastic dog. He spends the majority of his days at the dog park or behind our reception desk getting belly rubs and keeping our team entertained. You’ll see him around the gym from time to time. He’s very gentle and sweet and he really likes to sniff everyone – especially little kids who have gold fish crackers in hand 😉 If you do happen to see Cooper around the gym, ask him to sit and then give him a big rub behind his ears and on his chest. He loves that!

Before Cooper’s first doggy gymnastics class, he was very nervous and shy because he didn’t know what to expect. After the first few days though, he started to feel more comfortable and courageous and that’s when he found his cape. Now, you should see him fly!

Birthday: February 1, 2011
Birthplace: Maple Creek, Saskatchewan
Lives in: Calgary, Alberta
Favourite Food: Sweet Potatoes, Bananas, Ice Cream and Spaghetti
Favourite Gymnastic Move: Middle Splits and Handstands. He sometimes performs back bridges in his sleep too!
Motto: “Show love to everyone you meet. Dance like no one is watching. Make time for play each and every day. And have the occasional afternoon nap.”
Goal: “To catch that darn squirrel that taunts me outside the window at home.”
Tweet me: @SuperCooperFlip 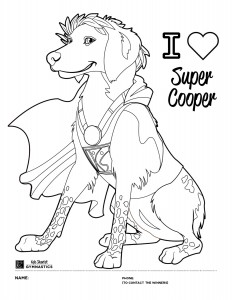